The Simplest Fool-Proof Tactic You Can Do To Increase Your Poker Profit. Seriously. 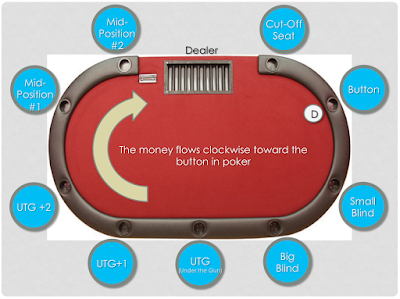 Okay, so you’ve spotted the sucker at the table--and it’s you. Now what? Answer: Move!

Being able to identify the good and bad players at a table is great— but what you actually do with that information is paramount. There are a ton of specific tools and tactics at your disposal to exploit those identified bad players (and also to avoid trouble situations with the identified good players), but there is one really powerful thing that anyone—even the most absolute beginner—can employ: table and seat changes.

I was working with a beginning poker student online a few months ago. I was in hands-off-and-observe mode, and this student was getting beat up pretty badly by the opposition at the $50NL table. We took a break and I asked what he thought was going wrong. “I’m getting killed by these other players," he said, "They’re reading me perfectly, and I can’t do anything about it!” So I asked if he thought he was the so-called sucker at the table. “Well, yes, obviously!” So then I asked why he was still sitting at that table. “Uh…."

There’s an old poker saw that says if you’re the 10th best player in the world, you’re still screwed if you sit down at a table with the 9 better players. Poker is a game that is played against other people, and if those people are more skilled than you, over time you’re going to lose all your money to them. So why would you even try? Yes, there are times when you just want to test yourself against the best, etc., but the majority of time you should be looking for, well, incompetent players to sit with.

This sounds kind of harsh and unsporting, but hey, poker is fundamentally a game of making fewer mistakes than your opponents, while exploiting the mistakes they make. Perhaps more important, it’s a game played for money. The other players at your table won’t hesitate to attack your weaknesses to get at your money, so why should you hesitate to exploit their weaknesses? Sit with the bad players and beat them up. And, conversely, get up and leave if you find yourself on the ropes getting hit in the mouth over and over by better players.

There are two key tactics to employ at the poker tables when you find yourself in a less than profitable situation: table and seat changes. The first (table changing) is pretty obvious; if you’re the 10th best player, just get up and leave. Ninety-nine-point-nine-nine-nine percent of the time, online and live, there are better opportunities, tables, and situations on which to spend your limited playing time. Why sit at a hard table that’s kicking your butt when you can be the butt kicker at another one? There’s absolutely no shame in picking a better battlefield on which to wage war. I do it regularly, and so should you.

The second tactic (seat changing at your table) can be very effective and highly profitable if you identify a fishy, exploitable player. If you’re seated to their right, it’s going to be much harder to abuse their mistakes and/or isolate them then if you're on their left. If a seat opens up 1-4 seats immediately to their left, you should try to move to it. Get on their left, isolate, exploit, and profit. Seriously, what are you waiting for? Someone else to take that money seat?

The same holds true against the good players at your table, but for different reasons; if your table has a very good reg sitting there raking chips, but you still want to stay at the table (e.g., because there are enough bad players to make it profitable to hang around), you should endeavor to move to a seat to the pro's left. This helps minimize the damage he or she can do to you when you enter a pot. It also allows you to employ advanced techniques like re-isolating if/when they raise a bad player.

We’ve said it before and we’ll say it again: Position is power at the poker table. Just like location is to real estate, the three most important things at a poker table are position, position, and POSITION. So you should move, move, MOVE! Money flows clockwise at a poker table, and the best players set their table clocks accordingly.

So back to our student. After the "Uh...." comment when I asked why he hadn't left the table, we took a break, talked about the mistakes he was making, and then we found a better game to sit at. I’d like to report that we crushed the new table, but on our fourth hand of the new session our 5-bet all-in-preflop with Aces got called by Kings and we were promptly coolered for a 100bb buy-in. My student began to tilt, so we did the ultimate table change: we stopped playing altogether for the afternoon. The good news is the lesson was still ultimately learned, and in a follow-up session a few weeks later, we did crush it for a couple of buy-ins in an hour— after carefully selecting a soft, juicy table to exploit, that is.

Okay to briefly change the subject, I have a question: did you like this post? Hate it? Want to read more like it? Have ideas for improvement? I’d love to hear from you, either in the comments below, or directly via email. Click here to email me a quick note with suggestions— or just to say howdy. I look forward to it.