A Little Stress is a Good Thing

“Emotion is not the problem. It’s the key to mastering your game.”
– Jared Tendler, Poker Psychologist

Unless you’re brain dead or some kind of alien robot, playing poker for money will bring out emotions in you, both good and bad. Playing competitive poker causes stress.

And guess what? Neither of these things is necessarily bad for you or your play. In fact, a little stress and emotional arousal can be beneficial to your game and can give you a competitive edge… but only up to a point. Then things start to go south again. Let me explain.

Many uninformed poker pundits, arm-chair coaches, and so-called experts frequently say that you have to be emotionally dead at the tables. They write things like: “to win at poker you have learn to totally let go of caring,” and “don’t think about the money or how you’re doing—you have to learn to not give a crap.”

I used to buy into this notion, as do many amateur players and otherwise smart people that should know better. For instance, I was reading a well-regarded poker strategy book the other day and saw a quote by Katy Lederer, sister of the infamous poker scoundrels Howard Lederer and Annie Duke. In this otherwise solid book, Katy was quoted as saying:

“The cardinal sin in poker, worse than playing bad cards, worse even than figuring your odds incorrectly, is becoming emotionally involved.”

What Katy espouses is a common misunderstanding of the game by beginners. We (correctly) take the level-1 advice of learning to not focus on the results of a specific poker hand, and we expand it (incorrectly) to mean we should learn to completely divest ourselves emotionally during play. These two things are not the same. The former is good advice, the latter quite bad.

Sports psychologists have known about the relationship between stress and performance for years—over a century in fact. Way back in 1908, the researchers Robert Yerkes and John Dodson performed a series of experiments that resulted in something called, not surprisingly, the Yerkes-Dodson (YD) law.

The YD Law states that performance at a task increases with physiological and/or mental arousal. But depending upon the difficulty of the task, this performance increases only up to a point. When levels of arousal become too high, performance decreases. The process is often illustrated graphically as an inverted U- or bell-shaped curve which increases and then decreases with higher levels of emotional arousal. Here's a cartoon version of the YD Law to illustrate the relationship between arousal and performance: 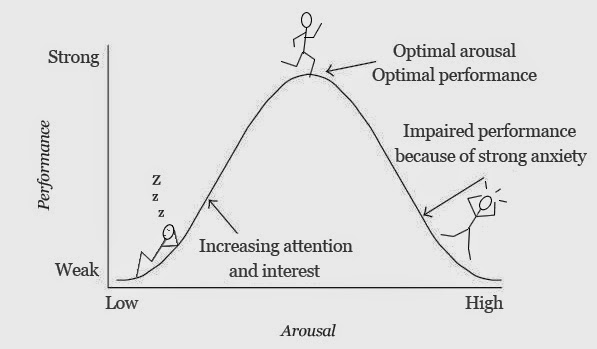 Playing competitive poker for money clearly falls into the latter category. Poker is complex and intellectually demanding. This means you need to be emotionally aroused when you play, you need to feel the stress of the game—but only up to a point. Too much stress or arousal can cause sensory overload, fatigue, fear, poor decisions, and so on. In other words: tilt. 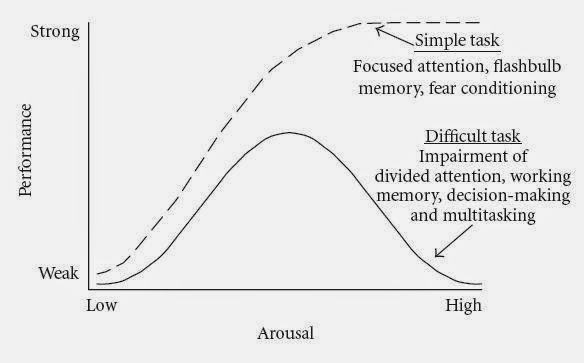 Tendler really nails it when he writes that emotions aren’t our enemy at the felt—quite the opposite, in fact.
Understanding--and using to our advantage--our emotions at the poker table are a fundamental key to mastering the game. And embracing the stress part of poker is part of this over-arching emotional puzzle that is poker.

A little stress does in fact go a long way.